Since Ancient times, silver has been used for jewelry and for eating and drinking vessels. People have been mining silver since at least 3,000 BC.

Silver was also used for coins. From about 400 BC silver coins were used in Greece.

Both the Aztecs and the Incas made jewelry from silver – until they were conquered by the Spanish in the 16th century. The Spanish looted the New World of precious metals. During the 16th century 7.4 million kilograms of silver were shipped to Spain.

Silver was found in Nevada, USA in 1858. As a result there was a silver rush. In 1859 Henry Comstock discovered silver in California.

Today silver is often used in photography and in dentistry. Silver is also used in batteries.

Silver is the state metal of Nevada. The chemical symbol for silver is Ag from the Latin word for silver, argentum. Argentina also gets it’s name from silver.

The whitest of all of the precious metals, sterling silver has been heralded for centuries for its highly lustrous finish and versatile applications. Although harder than gold, sterling silver is still considered one of the more pliable and supple metals. Its malleability makes silver easy to hammer and mold into various forms and shapes. Silver melts at a slightly lower temperature than gold (1760 degrees F as opposed to 1960 degrees F).

Dating back to the time of primitive man, silver has been referred to by many different naming conventions. The story of how the word “sterling” was incorporated into the name is rooted in 12th-century lore. As payment for English cattle, an association of eastern Germans compensated the British with silver coins dubbed “Easterlings.” Eventually, the Easterling was widely accepted as a standard of English currency. The name was ultimately abbreviated to “Sterling,” which is now used to refer to the highest grade of silver metal.

The official designation of “sterling” to a piece of silver indicates that it contains at least 92.5% of pure silver. The remaining 7.5% can be comprised of any other metal alloy, most commonly copper. Although it may seem that an even higher silver content would be desirable, that’s not actually the case. Metal alloys with a silver content of more than 92.5% are too pliable to be used without suffering from dents and dings. The second alloy is required to ensure the metal’s stability and resilience.

Other Types of Silver

In addition to sterling silver, which contains 92.5% silver and 7.5% copper alloy, there are many different varieties and grades of silver in production throughout the world:

Fine silver: This type of silver has a silver content of 99.9% or higher. Fine silver is much too soft to be used in everyday applications, such as jewelry, dining accents, or tableware. This premium class of silver is used to make bullion bars and coins for international commerce.

Mexican silver: Another premium silver, Mexican silver consists of at least 95% pure silver and 5% copper. This elite form of the metal is not currently in wide circulation in Mexico; most of the silver jewelry and accents sold in Mexican marketplaces is forged from 92.5% sterling.

Coin silver: Comprised of 90% silver and 10% copper, coin silver is made from melting down standard silver coins. Lower in silver content than sterling, this metal was widely used as silver tableware in the United States between 1820 and 1868, and as common currency until 1964. 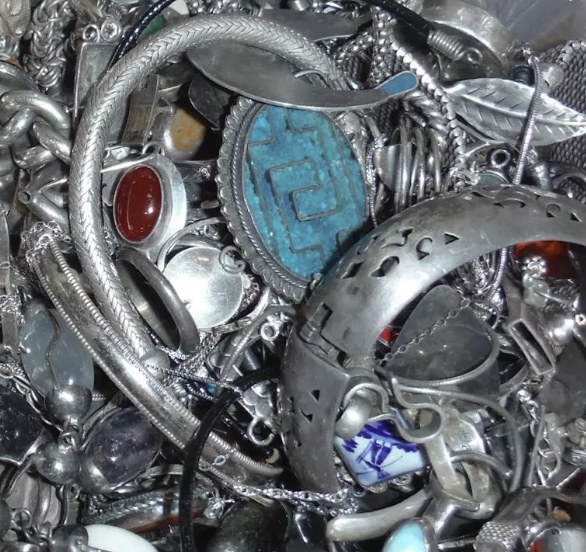